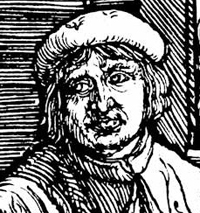 Thinker, writer, publicist and translator, artist and printing pioneer — the founder of the Belarusian and Eastern Slavic book printing, educator and humanist, doctor of medicine.

In 1517 he issued ‘The Psalms’ in Church Slavonic language close to Old Belarusian. In 1517–1519 in Prague, he published 22 books of the Bible; in one of them there was a front page to all of these books — the first front page in a Slavic book in Cyrillic script. In 1552, ‘A Small Travel Book’ was issued in Wilno, as well as the ‘Apostle’ in the Slavonic language in 1525.

Skaryna’s traditions have been continued and developed by his outstanding followers — printers, writers, scientists and cultural actors of Eastern and Western Europe.