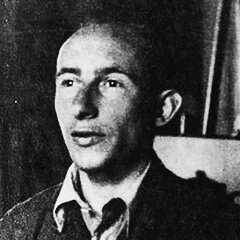 (1903-1941)
Lev Yudin, a painter, graphic artist, and illustrator from Vitebsk, was one of the followers of Kazimir Malevich, UNOVIS member, member of the Group of Pictorial and Plastic Realism.
How Yudin met Malevich in Vitebsk
Lev Yudin was born in Vitebsk in 1903. At the age of 16, he entered the Vitebsk Art School, where he met Kazimir Malevich. Malevich was not the only prominent artist teaching there, so Yudin managed to study with Jānis Tilbergs, Nina Kogan, David Yakerson, and Vera Ermolaeva. Yudin became very close to Malevich during his studies, and by that time, he had already started his famous diary. In 1920, he joined UNOVIS. Two years later, together with Malevich and other group members, Lev moved to Petrograd. In 1922-1923, he participated in UNOVIS exhibitions in Vitebsk and Moscow.
What happened when he moved to Petrograd
In Petrograd, Yudin continued his studies and enrolled at VKhUTEMAS.
VKhUTEMAS (Higher Art and Technical Studios) were educational institutions in Moscow, Petrograd, and other Russian cities founded after the Russian Revolution of 1917. VKhUTEMAS rejected old-time academic art. Its main principles were freedom of art and the ability to elect the heads of studios.
Yudin studied a year at the basic VKhUTEMAS course and then started working at the State Institute of Artistic Culture headed by Malevich. The Institute was both a research organization and a creative association. Until 1926, when the Institute was closed, Yudin worked as Malevich's assistant. He was engaged in research of cubism and also headed the Laboratory of Form.
In 1927-1934, Yudin was a member of the Group of Pictorial and Plastic Realism.
Group of Pictorial and Plastic Realism was a Leningrad art association, which included former UNOVIS members and was developing the ideas of Malevich.
The group was never officially registered, and all their exhibitions took place at Vera Yermolaeva's apartment. The authorities got suspicious of the unofficial displays and discussions, and many artists were summoned for questioning to NKVD. In 1935, some members of the association were found guilty of propaganda of anti-Soviet ideas in an attempt to form a pro-Western intelligentsia. Some artists, including Lev Yudin, were only witnesses in this case.
Around the same time, Yudin was illustrating popular children's magazines 'Chizh' and 'Yozh'. In addition to making drawings, he also made exquisite improvised paper cutouts. Most likely, he was taught to make reisele (Jewish paper cutting technique, similar to Belarusian vytinanka) by his mother. In his works, he subtly conveyed the intonations of the avant-garde poets Daniil Kharms and Alexander Vvedensky.
Why didn't Yudin see his own solo exhibition?
General public appreciated Yudin as an independent artist quite late. His first solo exhibition took place in 1973. Unfortunately, this happened long after the death of the artist. When the Great Patriotic War began, Yudin was 38 years old. He was mobilized and died in his first battle in 1941.
Yudin was constantly writing something. What was that?
Lev Yudin kept diaries for most of his creative life, and they are valuable for two reasons.
The first one is Malevich. Lev Yudin started keeping his diaries while studying in Vitebsk. He recorded in detail Malevich's lectures, his artistic ideas and creative methods. Those diaries provided a lot of previously unknown facts and details of Malevich's creative work.
The second reason — diaries show Yudin as an independent artist, not just a follower of Kazimir Malevich. His notes also contain the author's own hypotheses, his personal concerns, and sketches of his new works. Lev Yudin appears to be a highly reflective and demanding artist. For example, in 1921, he wrote this: 'Evening. I've been working. Nothing comes out right. So far, I'm only satisfied with four old drawings. All the works that followed seem weak, thoughtless, empty, and insignificant.'
'Lev Yudin. To Tell — Your Own…', a book of his diaries, letters and notes from his contemporaries by Irina Karasik, a specialist in the history of the Russian avant-garde was published in 2018.